Yesterday, when I read the article "The business that has not 'died' because of the epidemic has 'stopped breathing' due to production cessation" on VietnamNet online newspaper, I cannot disagree with what my colleagues have reflected through the newspaper. However, I would also like to share some pictures and a few words about how Lotus is currently performing the "3 on the spot" rule of the city.

Saigon in April with rows of red phoenix flowers 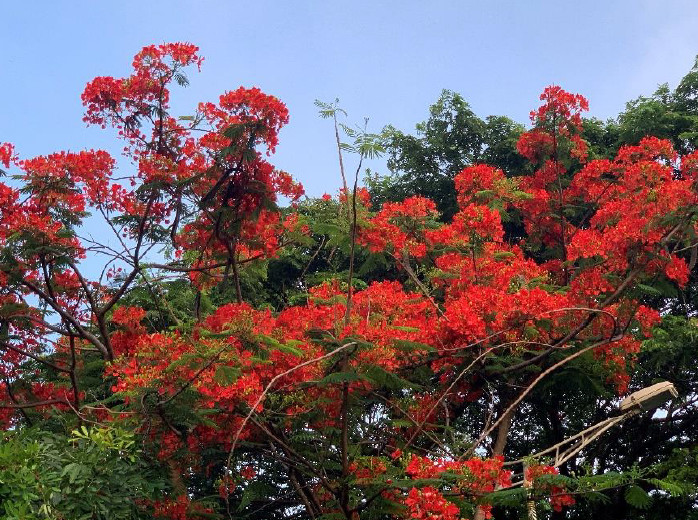 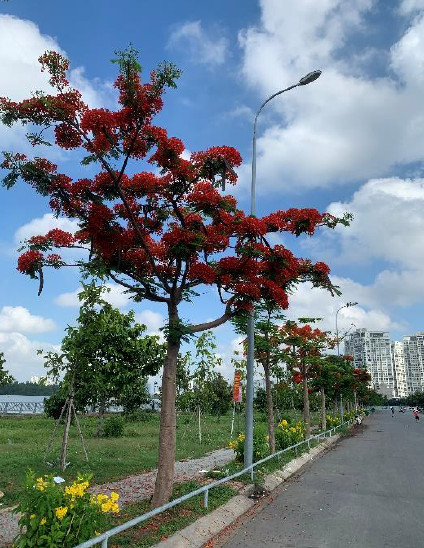 Saigon in April with rows of red phoenix trees on the peaceful Saigon River stood beautifully after the city overcame its third outbreak during the Lunar New Year, as it gives people more faith and vitality. While the epidemic has begun to break out in Hanoi, Bac Giang and Bac Ninh, Saigon is still quiet. However, perhaps through the images of the crowded beach in Vung Tau, in Da Lat ... and then the election on May 23, the city’s leaders had worries and bad premonitions for their city. That forecast became reality with the delta variant, like a cataclysm that swept over Ho Chi Minh City. We were confused, organization and operation of testing and vaccination was and still is not optimal. However, some anti-epidemic measures, although criticized as ineffective, such as isolation, social distancing and mask culture has helped to contain the pandemic to some extent, not giving the "opportunity" to develop as freely as in many countries, keeping the number of infected people as small as possible. When comparing the US, a country with a high vaccination rate with Vietnam, within past 24 hours, the US has more than 27,000 new infections, and 255 more deaths. Vietnam has only added 1438 new cases and a total of 207 deaths so far. Saigon, the most difficult place to control, has added 1071 cases, bringing the total number of infections in Saigon since the beginning of the epidemic to 22,564 cases.

It's difficult to control, because in addition to people needing to live, Saigon is a place where people flock to find a future through work, even if they have no home, no door, and have to live on the side of the road. There have been many lives that have come to the city with no capital, and no home. For more than a month and a half, Saigon has not been able to function, work and live normally. People who are not sick become sick. Those that are not infected would have died from hunger than from Covid 19 if this city didn't have many charitable hearts. Today, it is still unknown when the opportunity to earn money will return

In a situation like this, how can production workers make a living? Every coin earnt is precious... In a difficult situation like this, we can see our weaknesses. Keeping a city like Saigon safe is no easy task. Even though the city is in lockdown, there are still more than 500 cases of drinking, gambling etc… being caught in one day. Saigon does not implement extreme regulations as seen in Wuhan back in 2020, but in general, the sense of compliance and disease prevention of businesses as well as much of the population will be very effective in containing the spread, so that Vietnam does not experience a similar situation to Europe and America or like Thailand, Malaysia, Philippines, Indonesia...

This morning, I went around the supermarkets (COOP Mart / Satra Food / Green Bach Hoa...) and it made me really admire the management of the Lotus’ factory kitchen for feeding hundreds of workers a day. 4 meals (Breakfast, lunch, dinner and late-night shift) in the past and coming days when doing 3 on-site activities (live on site, sleep on site and work on site = at the factory). Food in the markets is not abundant, waiting for an hour to buy a box of soy milk which ran out anyway... Vegetables and fruits in neighbouring provinces are not lacking, but they cannot bring them into Saigon and sell at a fair price, which is understandable because of the state's regulations (car must have a license, driver must be tested once every 3 days). All very time consuming and costly. Before lockdown, driver’s performed three trips a day. Now, it takes two days for one trip to be completed.  How does the government "stabilize" the price? Distribution companies are all private, how do you propose to make up for their losses? This has resulted in Saigon having a shortage of food while at the same time, rural farmers have a surplus and cannot sell their goods!

With many experiencing difficulties, how can Lotus, a small company, implement the city's "three-in-place" policy? It can be said that the company's management is very sensitive to the requirements of the city. Instead of waiting for the government to make an official announcement, then implementing said policies, Lotus prepared a whole week in advance. Although there are many difficulties when trying to vaccinate workers, Lotus has managed to vaccinate about 30% of its employees, while all Lotus employees undergo testing before implementing the “three on-site " policy. 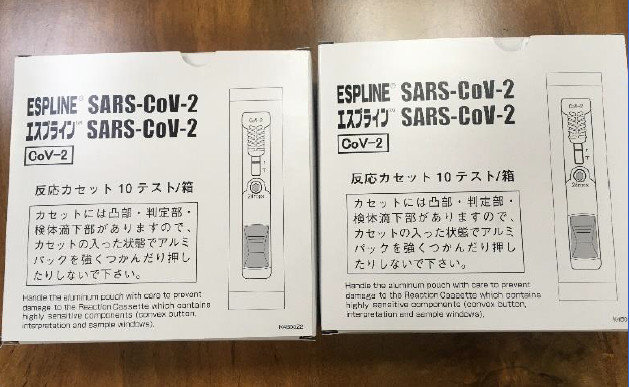 Covid 19 quick test for the workers in the company 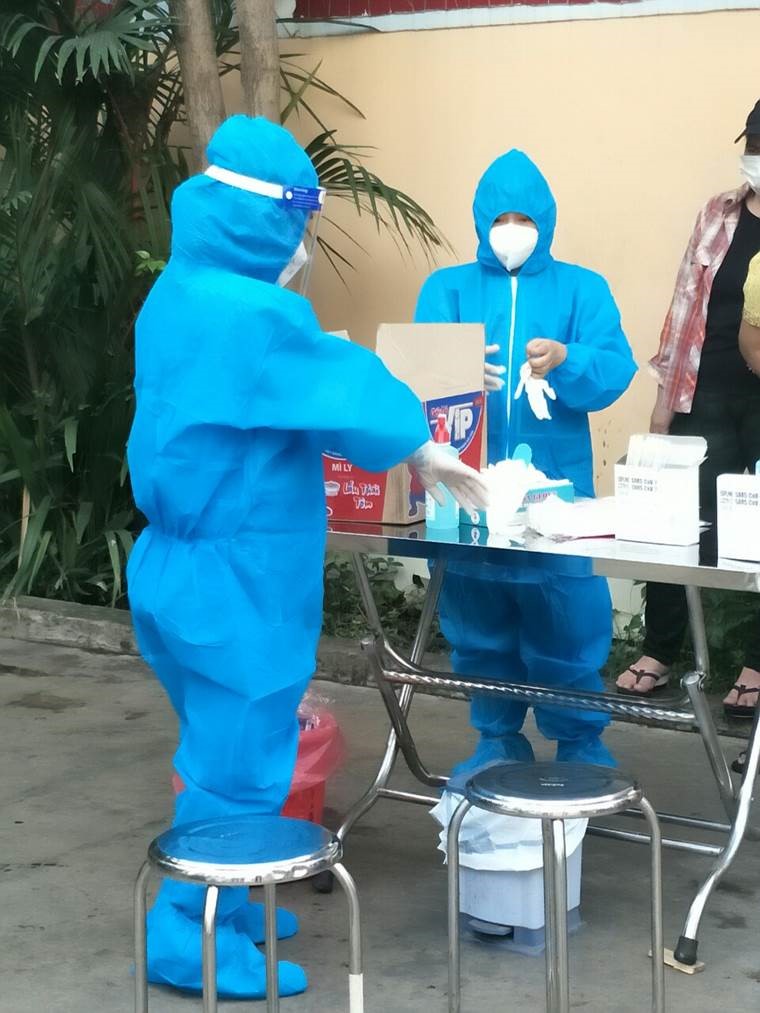 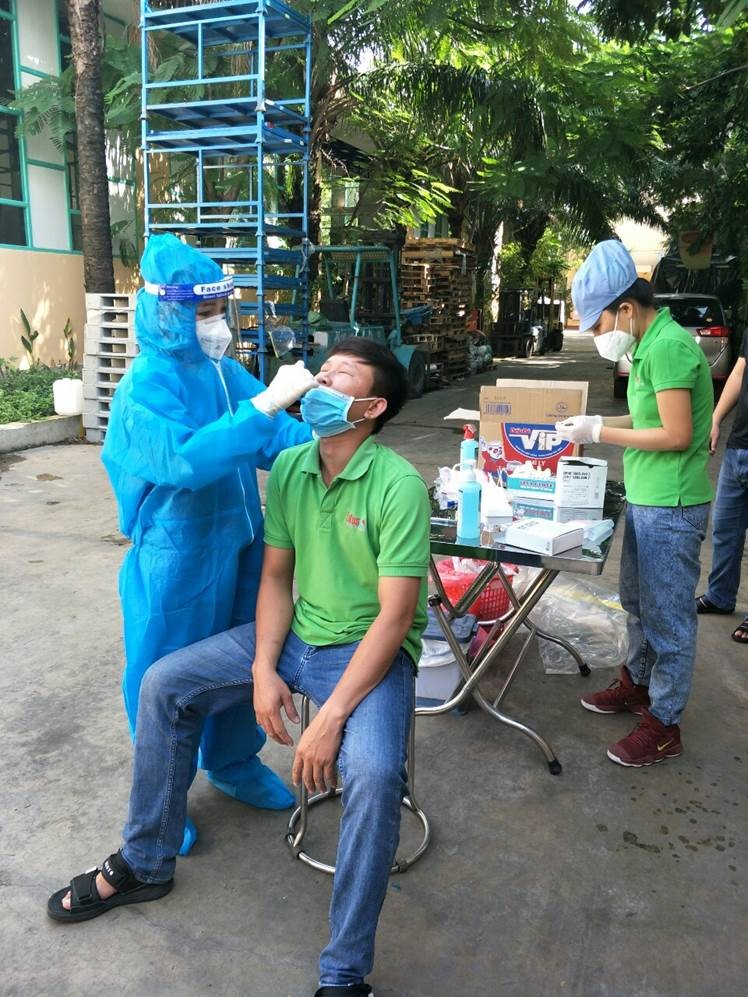 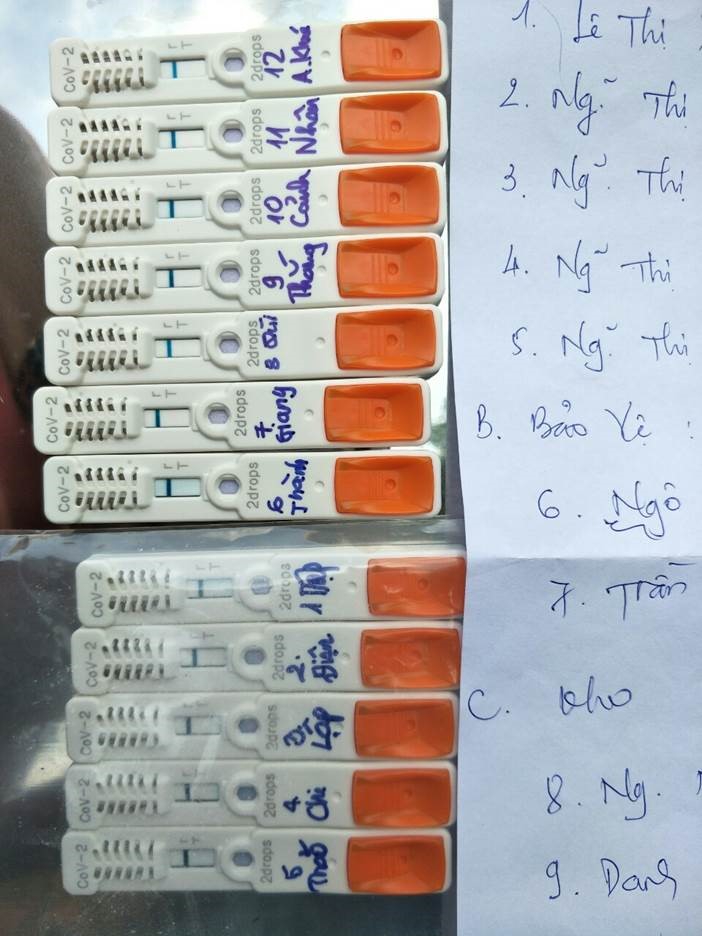 As a manufacturing company, Lotus is not only focused on its products, but also very focused on "quality of infrastructure" such as factories, toilets with showers, living quarters etc… Along with everyone’s active cooperation in complying and implementing the city's epidemic prevention regulations (such as the 5K policy), Lotus has taken extra steps such as collective exercising, gargling with salt water when entering and leaving shifts as well as regularly cleaning and disinfecting the factory and office. 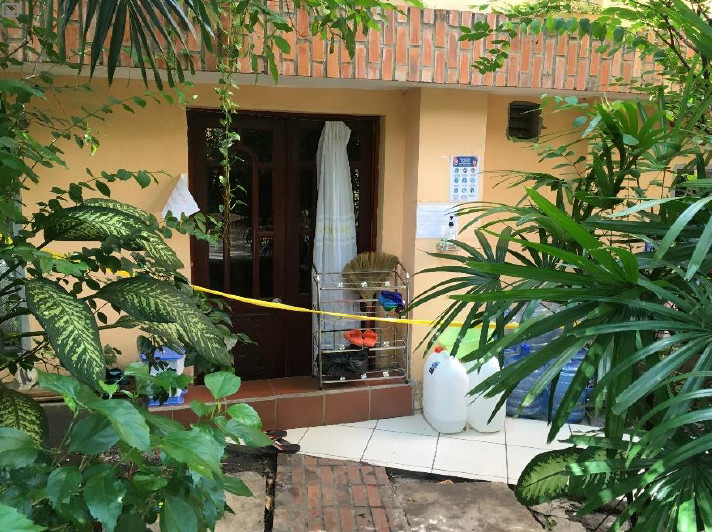 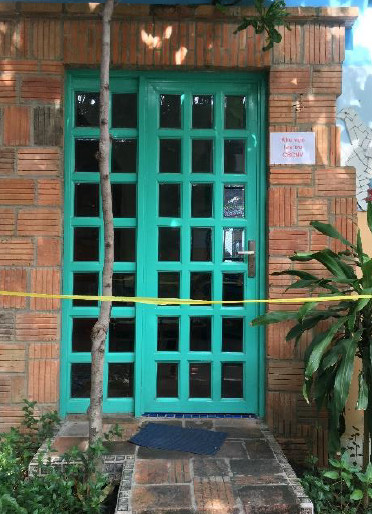 One of these bathrooms and toilets in Lotus 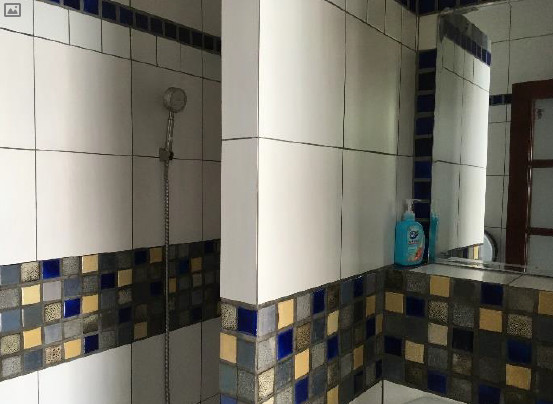 Numbered dining table. Only 3 people on each table.

While the City is fighting against the epidemic, consensus and compliance are extremely important. It only takes a glance at neighbouring countries, especially Indonesia, to see how bad the situation can be if we don't agree and comply.

Seeing that, I am very happy to see my brothers playing volleyball, fishing... in the factory premises during their breaks. The cleaners regularly clean and disinfect the factory next to the brothers. They are all hard-working workers, quickly adapting to new circumstances and requirements, ensuring that customers are not affected by the epidemic situation in our dear city Saigon.

Volleyball, soccer for entertainment after work 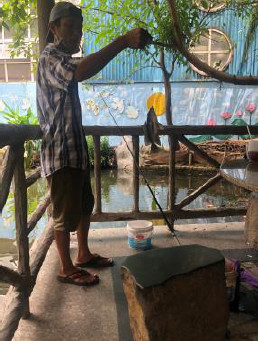 QC lab during “three on the spot” day. 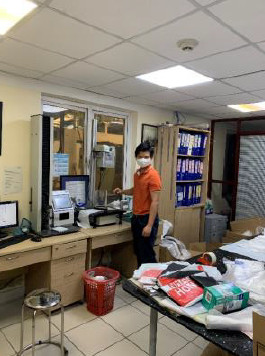 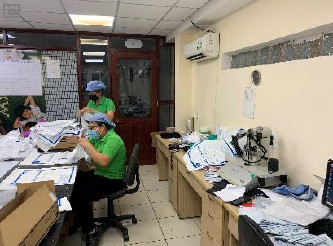 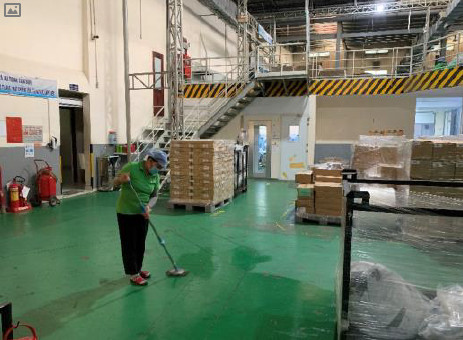 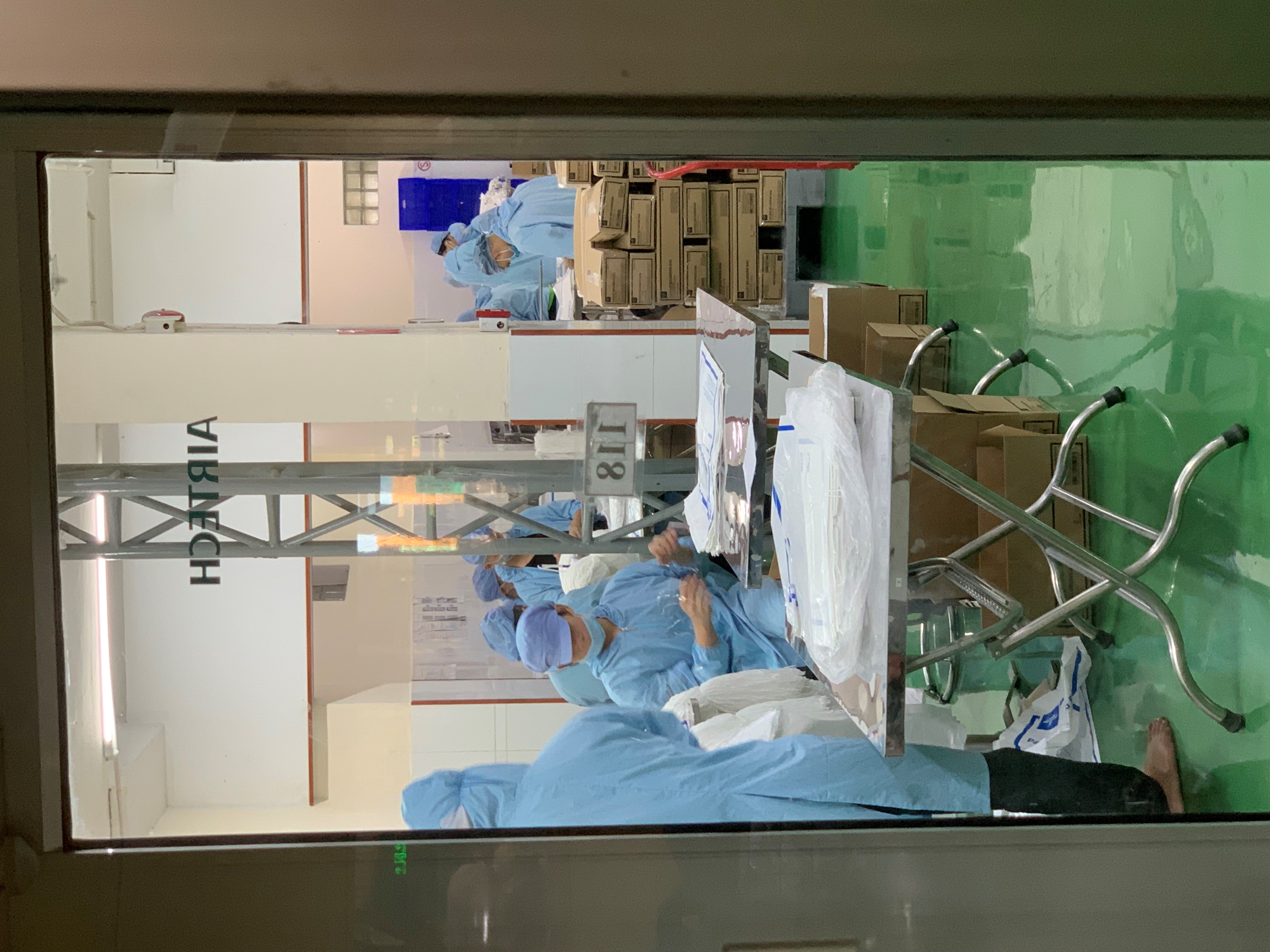 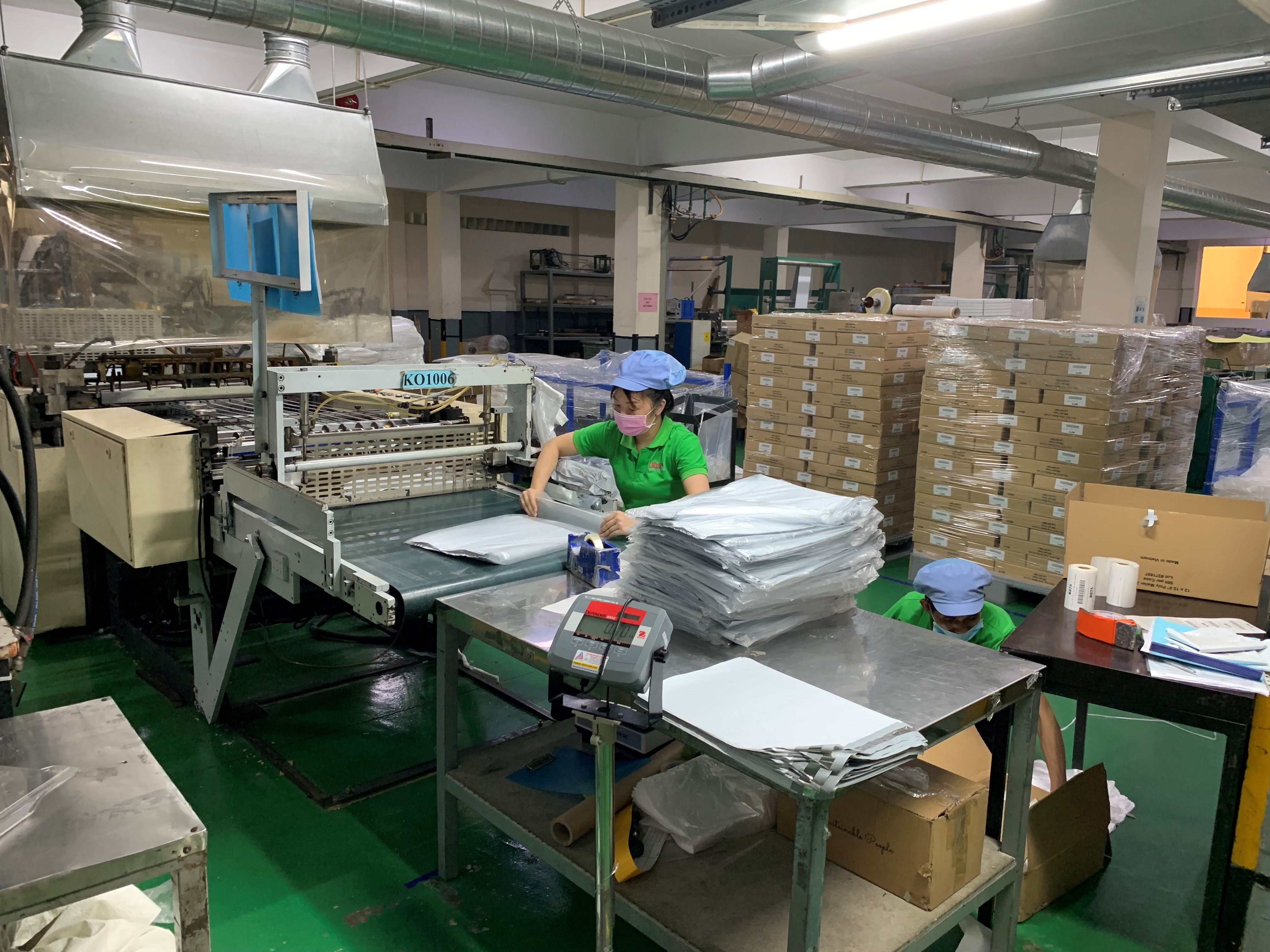 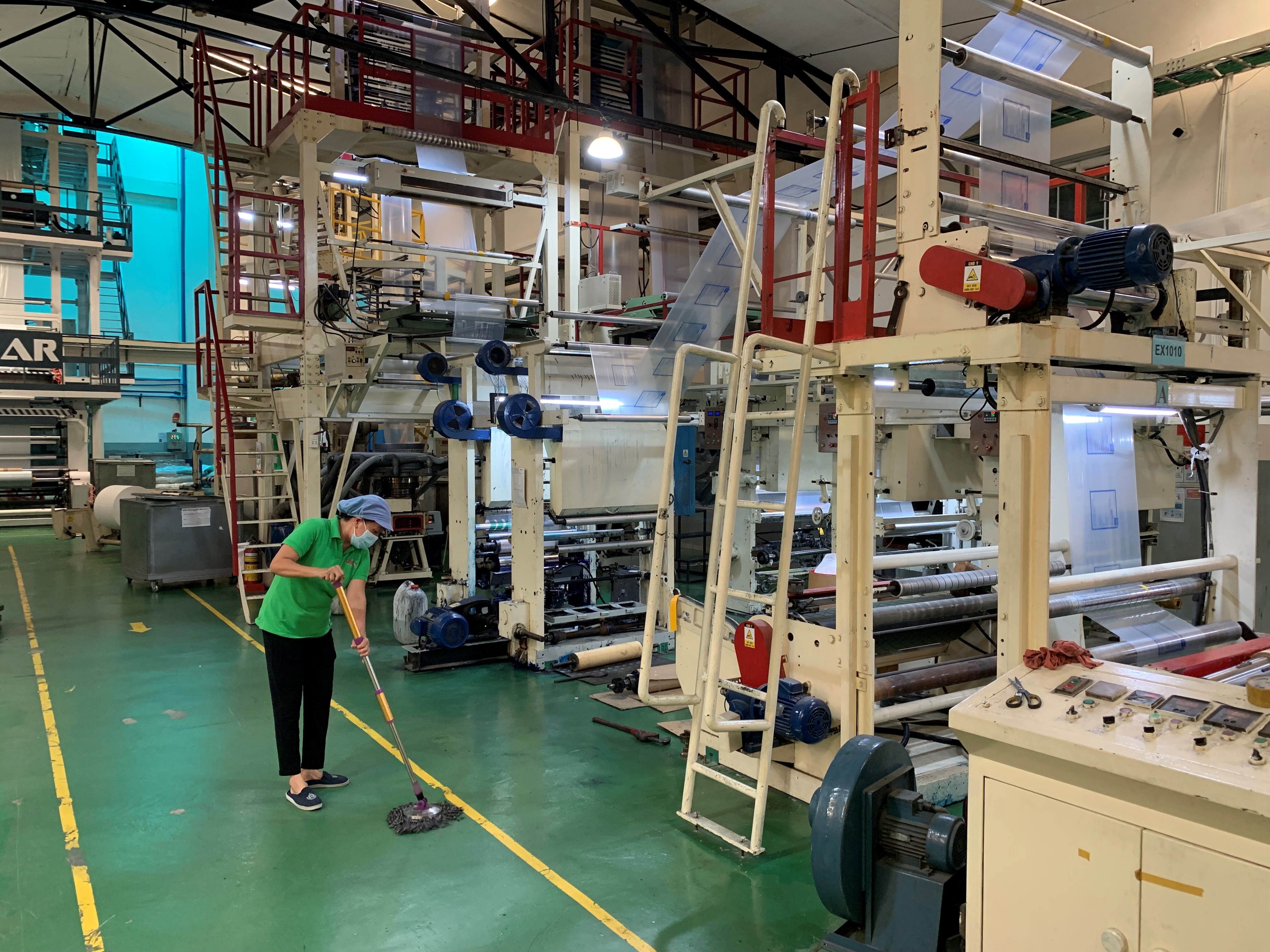 “Coffee shop” on the company garden in the evening 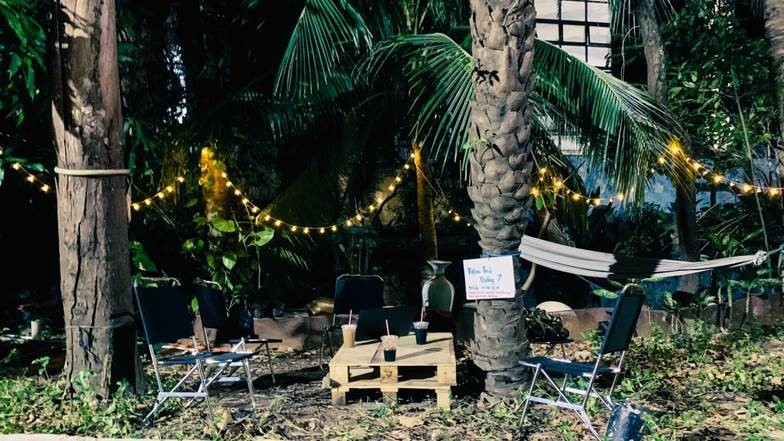 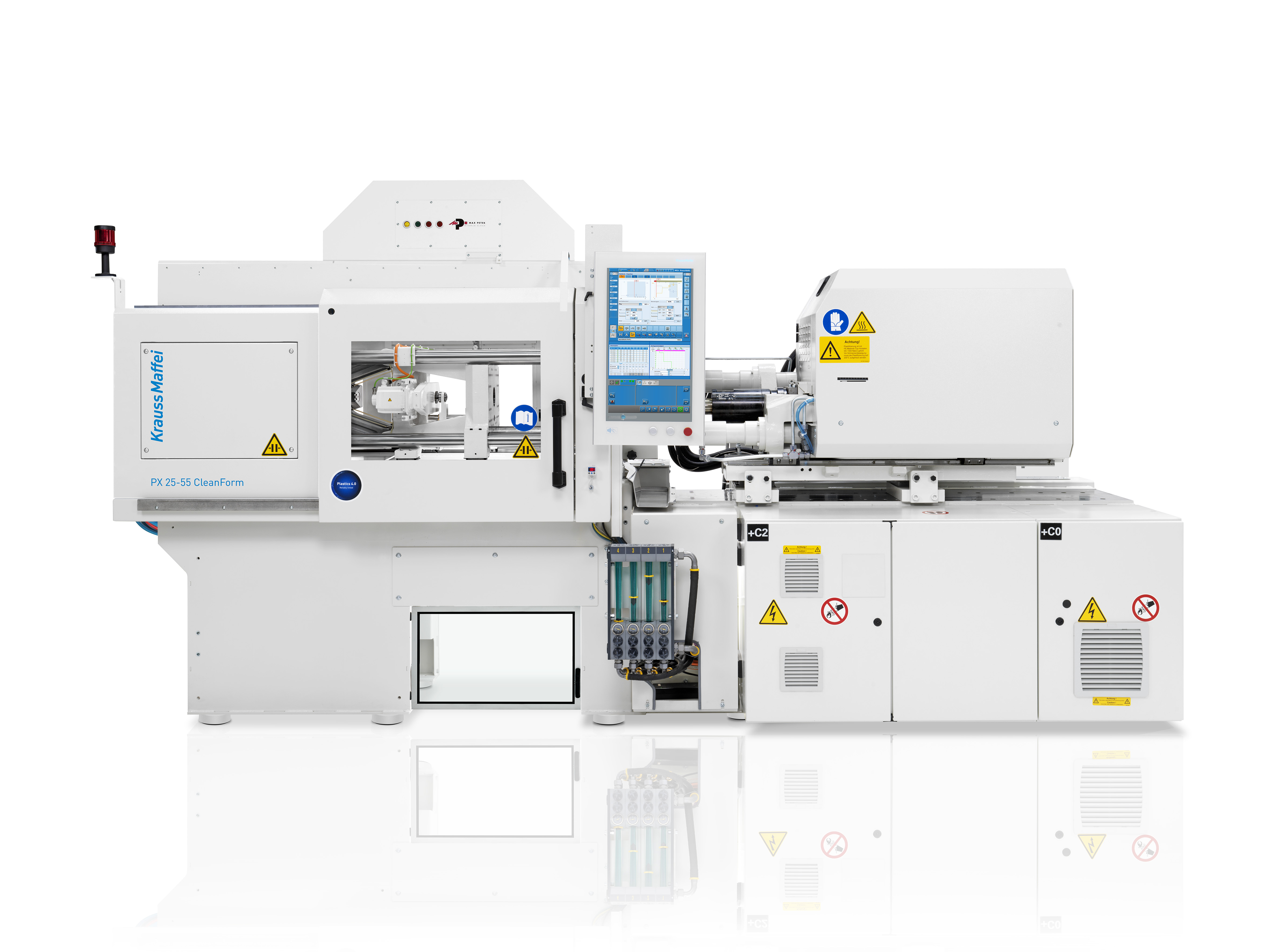 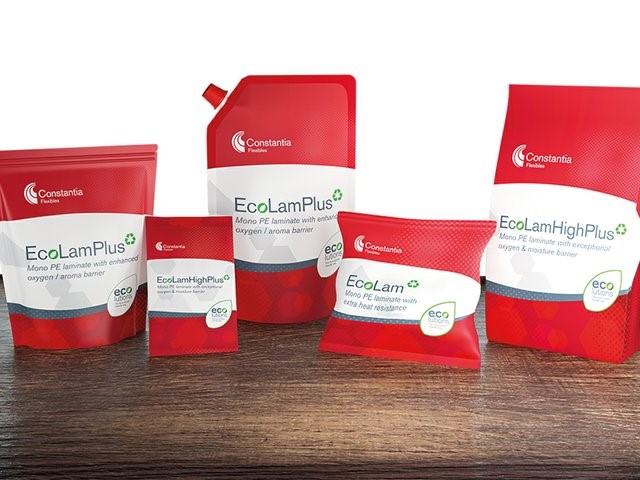 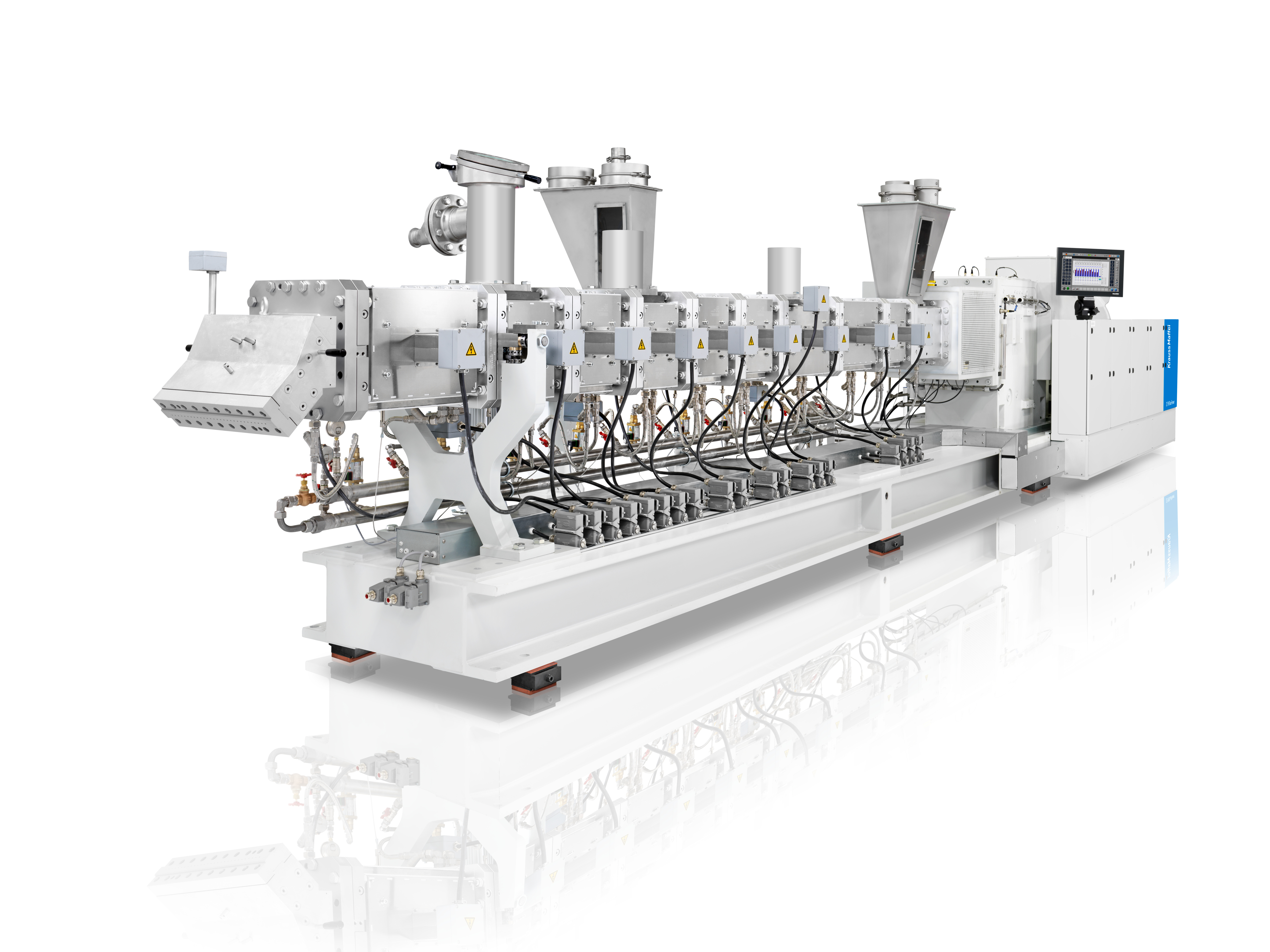 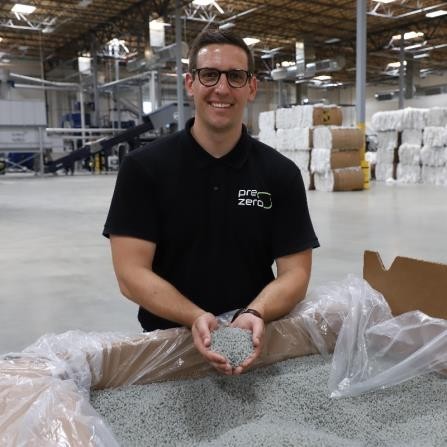